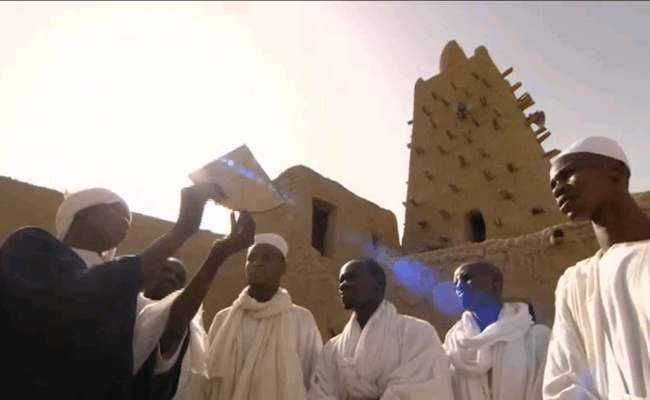 This complex documentary brings ancient science into the modern world

Guided by astrophysicist Dr. Thebe Medupe, a group of modern scientists engage in the first exploration of the scientific contents of the great manuscript archives of Timbuktu. As the ancient papers are in grave danger of being destroyed by the ravages of time, the team races against the clock to unlock the mysteries of this incredible library before this valuable history is lost forever in the sands of the Sahara.

For four hundred years Timbuktu was an academic centre of the world. The Islamic world brought a different perspective than Ancient Greece, transforming science to solve practical matters such as determining the direction of Mecca and time keeping. Despite having fallen into insignificance by the seventeenth century, thousands of documents have miraculously survived. Dramatic recreations of life in medieval Timbuktu illustrate and enhance the discoveries, while technical and scientific information is explained with computer graphics.

This complex documentary brings ancient science into the modern world, bringing the archives from sandy obscurity to global cyber access.

There will be a discussion after the screening.

This screening is a part of the African Science Film Series, an exploration of the untold stories of groundbreaking scientific developments by African people, created by Black History Studies in partnership with the Bernie Grant Arts Centre.

This event will take place on FRIDAY 7TH SEPTEMBER 2018 from 7pm to 9pm.

Tickets for this event are £8 plus booking fee.

Purchase your ticket from https://www.berniegrantcentre.co.uk/see/film-ancient-astronomers-of-timbuktu/